Hands-On Education in a One-Room Schoolhouse 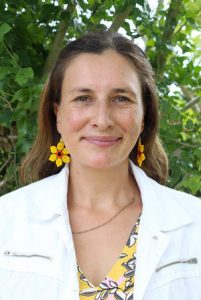 In the first few minutes of our Zoom call, Marcela had to get up to make sure her students were transitioning to their independent activity. Elementary teachers are always being pulled in different directions, but perhaps this is more acute in a one-room schoolhouse in Maine.

Marcela is in her third year teaching at the one-room school in Isle au Haut. The community has between 30 and 40 full time residents, including Marcela, her husband, and their daughter. She teaches just four students – a pre-K student, a first grader, a fifth grader, and her own child, Holland, who is in third grade. “Yes, like the country,” Marcela laughed when I asked how to spell her name. “My dad is Dutch.”

If you think pandemic migration away from cities would have increased the number of children at the school, it’s not a bad guess. Marcela said there was interest from seasonal families in moving to the island full time, “and I was thinking oh my gosh my population was going to explode, but,” Marcela reflected, “it takes a different kind of person [to live here]. You have to rough it. It’s really cold out here, you have to go shopping for supplies, the doctor is not able to come right away, you are committing to seclusion.” The explosion didn’t happen.

Marcela is a science teacher by training, having earned her life science endorsement in 2008 from UVEI, and although she is now working towards her elementary certification so that she can stay on longer at the 100-year-old schoolhouse, she finds ways to incorporate science into much of what she teaches.

In some ways, teaching science is easy when the natural world around the schoolhouse begs to be explored through a place-based education model that is central to Maine’s island schoolhouses. For example, Marcela explained, the park rangers from Acadia taught a lesson about moss, then she took her students into the park to collect moss and make scientific drawings. Last summer Marcela expanded the community garden and used it as the means for students to set up a working farm stand where they not only sold food they harvested, but calculated costs according to weight and decided how to spend their tips. (They bought books.)

Because the school is so secluded, Marcela relies on volunteers, community members, and connections with nonprofits to make experiential learning possible. Last year her students learned about reforestation and raised money to plant trees through a Vermont non-profit called One Tree Planted. This year her students are learning about Native American history and raising money for the Wabanaki Alliance to help support sovereignty of the Tribes in Maine. She wants her students to learn traditional Native American skills. “Ideally I’d like to build a canoe with them.”

Marcela draws on her experience at UVEI as one source of inspiration for the hands-on, cross curricular type of teaching she loves to do.

“The best part of the UVEI teaching program is the hands-on learning: the internship under the wing of an experienced teacher. You learn how to work as a team and how to plan lessons ahead of time. Whatever school I go to, I make sure to meet the art teacher, the technology teacher, and the family and consumer science teacher to see ‘okay what are you learning?’ I like cooperation with other teachers to carry a lesson.”

The one room schoolhouse is not the first time Marcela has taught several different subjects to very few students. For two years Marcela taught at the now closed Rochester Middle and High School in Rochester, Vermont. Like many small rural schools, Rochester High School struggled to maintain enrollment, and in 2018, its last year open, Rochester had just three students in the high school. She taught Spanish, health, family and consumer science, finance for seniors, and 5th grade science. “My room was beautiful with sewing machines, kitchens. I did a lot of growing the garden, cooking, and some festivals. It was fun.”

But the most fun Marcela had was in her next teaching position: “We moved to the Bahamas.” Marcela taught middle school science and Spanish to Bahamian students at Deep Creek Middle School, which is part of the Island School in Eleuthera, with a focus on hands-on, experiential learning. “It was one of the best teaching experiences. The culture was very similar to my Hispanic heritage, I taught along with scientists from the Cape Eleuthera Institute (also part of the Island School), and I had Spanish and Eco club after school weekly. It was amazing.”

One of the biggest challenges to one-room island school teaching? “I’m basically the principal and the teacher,” Marcela jokes. “I miss other teachers.” Although the PE and art teacher come in occasionally on a boat, Marcela and her assistant are the only full time educators. Marcela can collaborate with other teachers through Island Institute, which connects her with other island educators. Using technologies like Zoom, a strong early literacy teacher she met through the collaborative can teach her students while Marcela teaches Spanish and science to students on another island. It also allows her to share her knowledge with others. “I’ve been doing everything Encanto related,” she said, noting how her lessons connect to the recent animated Disney film. She sent another school specific flour to make arepas while teaching them about her Colombian heritage.

As our time to talk dwindled, I could hear her students start to chatter more in the background. Marcela had to go soon. “We’re going to do legos and sewing. That’s my special for the day.”

I admitted to Marcela that I was a little jealous of her teaching career – my time teaching young people was entirely in New Hampshire and Vermont and in fairly traditional models of schooling. “It’s a lot of work,” she admitted, but when her older students help teach her younger ones, “it’s pretty great.”