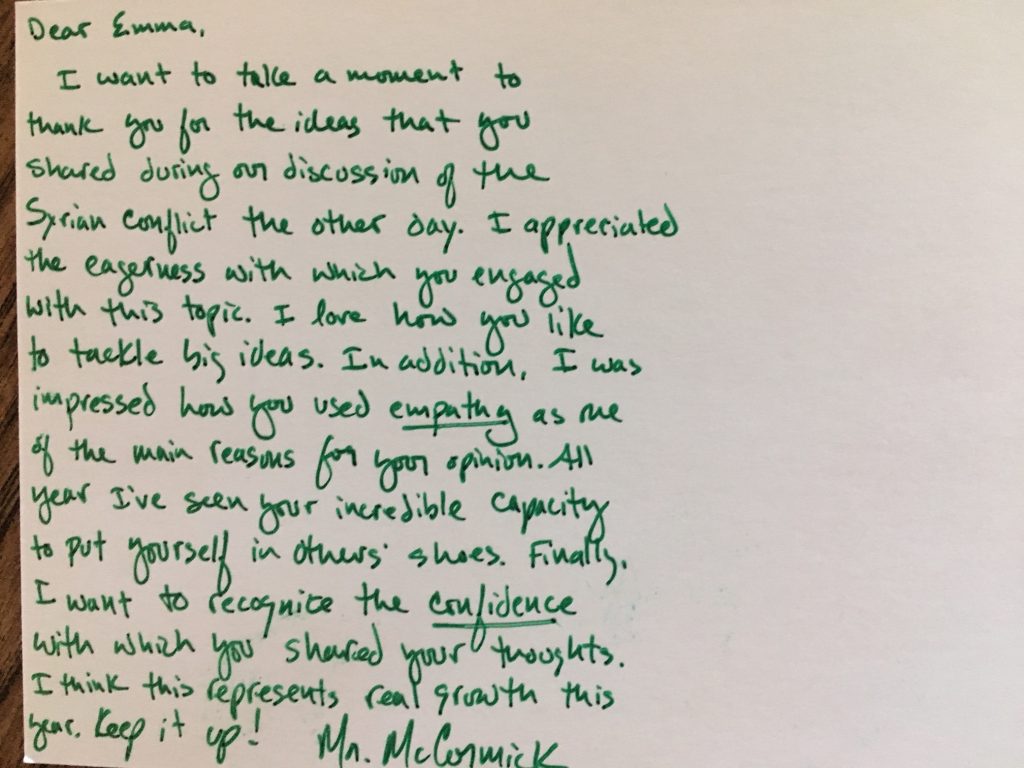 During my first in-service as a real teacher, one of the principals in my district gave this advice: “They won’t care how much you know until they know how much you care.” There have been times in my career when I have fought against this. Why should they work for me? Aren’t they working for themselves? But research bears out this quote. According to John Hattie’s Visible Learning, teacher credibility — gained through trusting and respectful relationship building — is one of the top ten influences on student learning.

It was in the spirit of building this credibility that I began writing students postcards. Some years I wrote them during the first quarter. Other times I wrote them at the beginning of the second semester. During particularly ambitious years, I’ve sent cards home in the fall and spring. But whatever the time of year, the idea was the same:  If I let students know I valued them, they would trust me more, and be more invested in their learning in my classroom.

And it certainly has worked. One parent wrote me: “When we returned from Florida yesterday, we received the postcard you wrote…Wow. [My son], all your students, are lucky to have you as a teacher and role model. I’ve always strived to express to others the exceptional or amazing things I notice about them. Many people think but not all speak…Thank you very much for providing him with a role model who also expresses what you notice. I will save this special post card for [him].”  Students are often eager to share that they’ve received my note. And even if they don’t explicitly say “Thank you,” I can tell by the smile with which they inform me of their mail that they appreciate them.

But this year, I’ve realized that the postcards I write home do as much for me as they do for my students.

I am, after all, human. I don’t think I’m the only teacher who, after an unsuccessful day — or maybe a string of unsuccessful days — begins to project his negative feelings upon his students. “It’s not me,” I’ve thought, “it’s them.”

It is in these moments, the ones I am ashamed to admit I have, that I have found it most helpful to write postcards home about the positive contributions students have made to my classroom. And I don’t mean re-labeling negative behaviors as positive ones: “I really appreciate the ‘energy’ that Johnny brings to the classroom.” I mean genuinely reflecting upon the positive qualities that my students share with me every day. There’s the student who struggles to work independently but who is a leader in the best sense of the word during Socratic Seminars. The student who struggles to follow multi-step directions but is unafraid to voice confusion that many other peers are reluctant to express. The student who shows up prepared for each and every class. The student who you think is not learning but whose reflections knock your socks off. The student who seems disengaged but greets you every morning with a polite and enthusiastic “Hello!” The student who at home listens to the latest pop but in class explicitly asks to hear your favorite jazz.

Picking up a postcard forces me to think about what I like about my students. And it doesn’t take long to realize that I like them a lot. It reframes my thinking about my students, my practice, and my profession. It can shift my thinking away from what has gone wrong in my classroom to what is possible in my classroom. In other words, it increases my sense of efficacy — another factor that, according to Hattie, can have a big influence on student achievement.

As I’ve invested more time into writing postcards, I’ve developed a few rules that guide me:

1) Every Student Receives a Postcard.  This can be daunting, but it is vital. Students will talk about their postcards.  If someone does not receive one, then the whole practice is counterproductive. If you work with a large group of students, consider dividing names among your colleagues.

2) Write to the Student.  In years past, I’ve addressed my notes home to parents and informed them of the positive qualities I see in their student. There’s nothing wrong with this approach. But I think it is more personal to write to students directly. And chances are, the student will show their parents anyway.

3) Be Positive.  In the past, I’ve been tempted to use the postcards as a way of urging students to be them best selves (as in: “I really appreciated your contributions to class today.  I would like to see that more often!”)  But students know a backhanded compliment when they see one. There is a place for goal setting — but a thank you note isn’t one of them.

4) Be Specific.  I do my best to include a specific example of a trait or quality I am writing about.  I also try to send the postcard home as close to when that example occurred as possible.  It helps that I keep a stack of postcards on my desk.  Writing a postcard is a great way to end the day.

Without a doubt, writing postcards is time consuming. It is hard to find a way to work them into an already-overburdened schedule. But, for me, they have paid dividends, both in my relationships with my students and in my relationship to my profession.